On March 14, $81 billion investment firm Allianz stated in a report released by the firm’s global economics and strategy head Stefan Hofrichter that the cryptocurrency market, regardless of its liquidity, is a bubble.

“In our view, its intrinsic value must be zero. A bitcoin is a claim on nobody – in contrast to, for instance, sovereign bonds, equities or paper money – and it does not generate any income stream.

Bitcoin’s demise would have few spillover effects on the ‘real world,’ since the market for this cryptocurrency is still quite small in size. As a result, we believe that the risks to financial stability stemming from bitcoin are negligible — at least as of today,” said Hofrichter.

However, as stated many times by respected analysts and bankers like Goldman Sachs CEO Lloyd Blankfein, the concept of intrinsic value is flawed, and base value in assets simply does not exist. For instance, stocks, commodities, and fiat currencies also do not have intrinsic value, as their value solely depend on the supply and demand sought out by the free market.

“If you ask a baby boomer, ‘Can you justify the value of anything that’s a digital business?’ they probably don’t accept that Facebook, Google, Netflix, Amazon, Apple, these are the largest companies in the S&P 500 and they’re primarily digital businesses built almost purely on digital trust.”

The value of cryptocurrencies like bitcoin derive from their security, decentralized protocol, and the distributed network of nodes, miners, and users that sustain the network. The computing power of the bitcoin network has increased to a point in which no single entity or organization can ever match it, disallowing or eliminating the possibility of double spending, or taking advantage of the system to produce more digital currencies.

More importantly, unlike the stock market and other private markets that are open exclusively to accredited investors and brokers, the cryptocurrency market is public. Any investor can trade or invest in cryptocurrencies. As such, bitcoin and other major cryptocurrencies have become more liquid than any other stock or asset in the global stock market.

Box Mining, a renowned cryptocurrency analyst, revealed that the number of Google search engine searches for the keyword “bitcoin bubble” has actually decreased since late 2017. 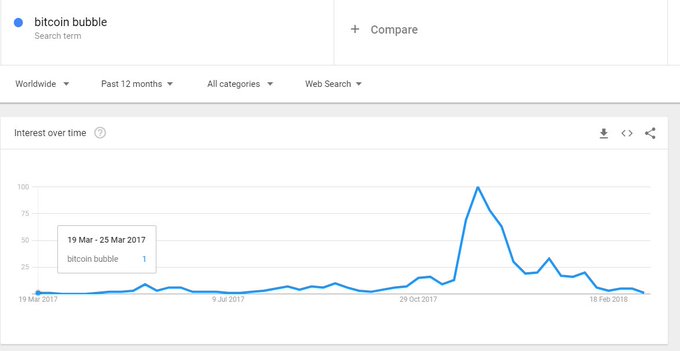 At least nobody is worried about the Bitcoin Bubble #Bitcoin #cryptocurrencies #BitcoinBubble.

Hence, to describe the entire market as a bubble by disregarding investors within it, institutional and retail traders with billions of dollars in capital, and the $13.5 billion daily trading volume of the market is highly incorrect.